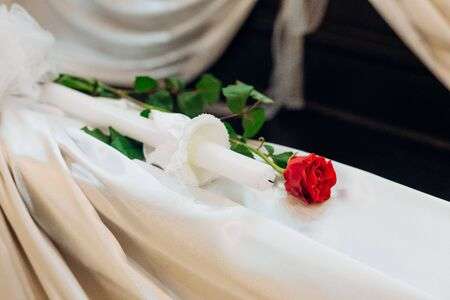 When you are attending the funeral of a loved one or a friend whose family will be observing the traditions of a particular religion, it is important to understand and be aware of that religion’s traditions and etiquette. In this article, we will be exploring Catholic funeral traditions in depth so you know what to expect and how to follow proper etiquette to best be able to pay your respects to the decedent and their loved ones.

What function does the Catholic funeral service serve?

In the Catholic religion, the family of the deceased traditionally hold a Catholic vigil or wake which takes palce after the passing of their loved one, but prior to the funeral mass and burial, typically held the day or evening before the funeral service. The vigil service may be performed at a Catholic church, the funeral home, or the home of the decedent. An important time to the loved ones of the deceased, the vigil allows family and friends to gather in prayer to offer their condolences to the decedent, and to support the grieving family. There may be readings and reflections to observe the Catholic scripture. Eulogies, singing and even poetry may also be performed during this ceremony.

A Catholic funeral or memorial mass also referred to as the Requiem mass is traditionally held at the church, two days to one week after the passing of the decedent. The Catholic funeral mass is a time to honor and celebrate the life of the decedent, while offering respects to their loved ones. The casket will be honored in accordance to certain rituals of the Catholic faith such as being sprinkled with holy water as it is carried into the Church, as well as an open Bible or crucifix being placed on top of the casket as well.

Traditionally, as a funeral service is a somber and meaningful event, those in attendance at the funeral service should pay their respects by wearing black, semi-formal clothing. Male guests should arrive in suits or at least a sports jacket coat and tie, while women wear a black skirt or dress, or pantsuit. Non-Catholics in attendance are welcome to join the funeral service, sitting in, singing and taking part in prayer, but will not be allowed to participate in the holy Communion.

To further pay respects to the deceased loved one, you may send flowers as they are always a beautiful gesture, but keep in mind the arrangement should be in accordance and appropriate for the somber nature of the event’s proceedings.

The final ceremony of a Catholic funeral service is the rite of committal, which takes place at the site of burial, typically a cemetery or mausoleum where the deceased will ultimately be laid to rest. A priest or deacon will bless the site and perform prayers in honor of the decedent, after which his or her remains will be buried on the burial site. After the deceased is committed to the burial site, a final prayer will be performed by the priest and everyone in attendance will be invited to join the final prayer. This is an extremely meaningful and sensitive stage of the funeral service, as it is the time that the deceased loved ones will be able to offer their final goodbyes.

With the largest and most comprehensive online funeral service directory, FuneralHomes.com is a trusted source for planning your Catholic funeral service. Using the funeral service network, you can easily connect with expert funeral planners and directors in your area to pay respects to your deceased loved ones, while honoring the beautiful and sacred traditions of the Catholic religion.

Guide to Dressing for a Funeral